A Night Out Collecting Signatures Against Tax Evasion

On Monday, 27 March 2017, I volunteered as part of a ten-people group to collect signatures against tax evasion at a concert in Berlin. This post gives a short introduction to the human rights issues arising from tax evasion mixed with a personal account of the evening.

Tax evasion by multinational companies like Apple and Starbucks sounds like a very abstract and complex issue. To my mind, it looks mostly like an interesting puzzle where you still need to find the bits and pieces. Courageous individuals leaking information such as Antoine Delatour in the Lux Leaks case and those behind the Panama Papers have increased the amount of knowledge which we can access. More information from a different angle is added by Oxfam, an international non-governmental organization dedicated to combating poverty and its root causes, in a report published in January 2017. This report shows a growing inequality between a tiny group of increasingly rich people – eight men – and a continuously augmenting majority of extremely poor people.

What Is Tax Evasion?

One of the core reasons for the increasing inequality is tax evasion – using official, usually legal methods to shift money in ways which allow for low taxation on huge sums.

This may sound very technical and complex. If you happen to live in a country where hospitals, schools and public transport are paid by tax money, it is very simple: the less money people – individuals and companies – pay in the public bank account, the less money can be spent.  Yes, it is tough that even if you only earn the German minimum wage working full-time, the state takes away almost 30 percent for various taxes (social security, pension, health care). But, at least in theory, the German tax system is based on the idea that the wealthier you are, the more you can and must contribute. Taxation is proportional to your income. Unfortunately, in reality, the German tax system – like most, if not all tax systems in this world – is enriched with a complexity of multiple exceptions. This system is best understood by those who can afford tax advisers, if not a whole legal department e.g. in the case of corporations.

Why is it so important that everyone contributes in a fair manner to the state? To give just two examples of human rights impacts arising from tax evasions:

Developing countries are hit even harder by tax evasion because their social net is weaker, if non-existent. 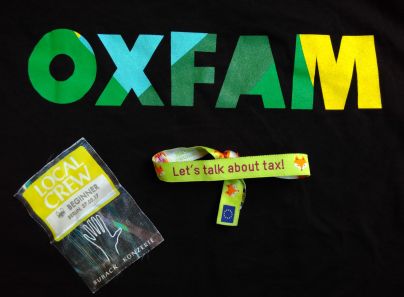 The light was too low during the evening, hence this photo of T-Shirt, concert badge and advertising wristband. © Theresa

In 2016, Oxfam Germany started an ongoing online petition to call on the leaders of the two biggest German parties to take political measures at national and international level so that multinational companies can no longer evade paying their fair share of taxation. Angela Merkel (chancellor and leader of the Christian Democratic Union party) and Martin Schulz (new leader of the Social Democratic party) are both running in the upcoming federal elections in September 2017. Additionally, in 2017, Germany is leading the G20 which forms an informal group of 20 states. They meet in July 2017 to, inter alia, discuss the international tax system.

The hip hop group Die Beginner invited Oxfam to advertise their campaign and collect signatures in the hours before the artists start their concert. This campaigning concept is called Oxfam On Tour. It is very attractive for volunteers because you can join the concert for free. That is exactly why I was standing in a concert hall on Monday, 27 March 2017, speaking to strangers about tax evasion.

I realise that this blog post is like a gigantic advertisement for the Oxfam campaign, but I would advertise any campaign with whose three core demands I can agree. Namely, the Oxfam petition asks to create an international minimum tax rate, sanction tax havens and oblige companies to publish where and what amount they pay in taxes on their earnings. While the demands may sound idealistic and impossible to achieve in the short-term future, they start a long overdue conversation. It is not an understatement to say that tax evasion is literally killing people.

The Panama Papers have uncovered unprecedented heights of tax evasion and their connection to multiple other human rights violations and abuses worldwide. © ICIJ

In the short two hours as a volunteer I learned a lot from other people and about myself. Asking people who went for a fun concert night out to put their signature down against tax evasion is a good training. It trains you to overcome shyness, cope with rejection and disapproval, and how to create two up to three short sentences to catch people’s attention. I am very happy that many people knew about multinational companies evading taxes – and were ready to take the pen and sign (76 people in my case). had expected far more people to be disinclined to consider tax evasion in this setting. As a business and human rights person, I enjoy to see corporate social responsibility done well: the artists who mentioned on stage the campaign by Oxfam Germany.

The only thing which I had not anticipated was that many women shied away from the topic of taxes, declaring themselves as not competent. This is surprising since one third of all tax advisors are women so there are women in Germany who do not have a problem with the concept of taxes^^ On a more serious note: everyone depends on our tax-funded social security system – especially pregnant women and those with children – and everyone pays taxes. Additionally, women in Germany earn up to 20 percent less for doing the same work like men.

Yet, instead of reacting to this augmented density of tax injustice, women groups were those who almost every volunteer – myself included – found hardest to reach. Working as a campaigner, you are best advised to focus on mixed and men-only groups in order to find support for a topic of high relevance to women. I must acknowledge that many women do not have embraced the idea of gender equality for themselves. This finding is the one which surprised me most about this evening out as a volunteer for tax justice.

If you want to learn more about how paying taxes and human rights are interlinked, the Tax Justice Network is a good place to start. Are you hungry for a short study on tax evasion by corporations? In its Special Report on Tax Optimisation the Agency RepRisk presents brief summaries about how leading multinational companies in technology, retail, and consultancy have used legal loopholes and tax havens.